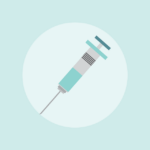 DOES THE FLU VACCINE COVER A OR B OR BOTH?

Many patients have inquired about the efficacy of this season’s flu vaccine. The flu shot designed by the CDC in cooperation with other countries covered both A and B. But because there are new strains every year, they are basically making a best hypothesis on the exact protein structure of the influenza virus.  This year they did a good job preparing antigens that looked like A but not such a good job at guessing B, thus the large number of B cases this year.

HOW MUCH WILL THE VACCINE REDUCE MY RISK?

Recent CDC reporting show that flu vaccination reduces the risk of flu illness by between 40% and 60% among the overall population during seasons when most circulating flu viruses are well matched to the flu vaccine .  To help put in perspective, 80-90% may become infected with seasonal flu if a flu shot didn’t exist. Thus it is still strongly advised that everyone get a flu shot every year.

IF I STILL CONTRACT THE FLU WILL IT REDUCE THE SEVERITY IF I DO GET THE VACCINE?

Another important reason to be vaccinated is even for those that did get the flu shot but still have the flu strain for both A and/or B, the severity appears less with people who received the vaccine.  Even if you or your children do catch the flu, you’re more likely to get a milder case that you can bounce back faster from with the flu shot in your system.

CAN I GET RELIEF EVEN IF I DID NOT GET THE FLU SHOT?

If you did not or choose not to receive a flu shot, there are medications to shorten the flu, such as Tamiflu. It can also be used to prevent the flu but not as effective as a vaccine.  This year all four of the vaccine viruses used to produce the vaccine were grow in cells, NOT EGGS. Egg allergy should NOT be an issue this year.

HOW MUCH LONGER IS THIS FLU SEASON?

Since the flu season is typically worse mid-December thru mid-February, the cases have hopefully peaked and we should start to see a reduction in positive diagnoses by the end of the month.