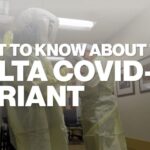 I have been asked when, as CMO, I would “declare” herd immunity for Covid and we can then move ahead and party like it’s 2019.

I earlier announced we should see herd immunity by Halloween, or even Labor Day, and I’m sticking with that forecast. Yet I fear I must announce another “surge” in cases, at least within Caduceus and PDQ Urgent Care & More as well as most of Orange County.

We were down to around 5-10 new Covid cases a week, compared to 25 or more per DAY last December. But now we are averaging 5-10 new cases a DAY, so clearly something is up. The Delta variant explains what we are seeing throughout California.

1. In 1972, country songwriter Alex Harvey wrote a song for country music diva Tanya Tucker called “Delta Dawn.” It was immediately covered by Helen Reddy to become a massive early 70’s hit. It told the story of a long ago rejected southern Belle who could not shake the memory of a suitor who jilted her. As the song goes, “In her younger days they called her Delta Dawn.”

“Prettiest woman you ever laid eyes on,” who paired up with the wrong type of guy. It was actually based on his mother who committed suicide over this failed relationship.

The Delta variant (mutation) was first noted in India in December 2020.  It spread like wildfire primarily because India was very poorly vaccinated. Yet, it has been found to be much more contagious and transmissible, and its “penetrance” very high. Almost as if Covid knew it was being “rejected” by masks and social distancing.

So Fact #1 is that it is VERY contagious.

2. Two years previously, a backup singer with singer Leon Russell’s band became the muse for a song he wrote called “Delta Lady.”  Ironically, that singer, Rita Coolidge, sang backup vocals on the actual song. A year later, Leon left her, yet always referred to her as “My Delta Lady.”  Why that name? Hard to say, but in chemistry a delta reaction is one where you add heat to the reaction.

Hey, do you have a better guess?

It brings up the question of whether a third “booster” of Moderna or Pfizer would help keep Delta away. There is not enough data to support that theory. It does appear the antibody levels will fall off around the 11-12th month mark, so a 2022 booster will be advised I suspect. If you are immunized, no need to worry about another shot, but you may want to mask up and social distance until we know more about the Delta variant.

3. In 1928, a new airline was founded in the Mississippi delta region, hence the name “Delta.”  It grew rapidly and went through several mergers and acquisitions, always as the surviving entity.

But in 2005, Delta was forced to declare a Chapter 11 bankruptcy.  Unlike its competitors, Delta did not lock in long term fuel contacts when prices were low. In 2005, fuel prices skyrocketed, and Delta was unprepared. Needless to say, Delta learned its lesson and now locks in lower fuel prices whenever able.

With the Delta variant, it has also caught certain patients unprepared- namely those unvaccinated. Even more specifically, kids and young adults are the main victims now.

At Caduceus, over 80% of our new cases are in patients under 35. Very few seniors are catching the Delta variant, presumably because they are vaccinated. One wonders if, like Delta Airlines, the youth will learn its lesson and get vaccinated.

4.In 1980, David Crosby wrote his last song as a part of Crosby, Stills and Nash. Its name? One guess.

“Delta” was an escape song, revealing his weariness over the fast paced world of music executives and big cities. He longed to be in a boat drifting down the Delta (presumptively the Mississippi Delta).  As the lyrics say, “It seems as if time stops on the Delta.”

For those researching, investigating, and treating Covid daily, it is easy to get weary of the “authorities” who downplay the protection of natural antibodies- obtained by actually contracting Covid. At Caduceus, we have had two out of over 3500 cases in patients who had Covid previously. But neither allowed us to check antibodies. Conversely, we have had over a dozen cases of Covid diagnosed in patients who were vaccinated. Even that comes to a less than 1% failure rate, mirroring what is being seen across the country.

So do antibodies—either natural or via vaccines-protect from the Delta variant?
Yes.

There is concern Delta is more contagious, thus more likely to infect even the vaccinated. But so far, the local outbreaks and surges appear to be mostly in the unvaccinated or un-antibodied. (Yes, it is permissible for writer’s privilege to allow making up new words.)

And like David Crosby-once things calm down-I want to escape to the Delta, where time stops.

5. How can we leave out the most famous Delta of all???

In 1977, Harold Ramis told us a story we would never forget.  In the year 1962, two freshmen seek to join a fraternity. Finding themselves out of place at the prestigious Omega Theta Pi house’s party, they visit- next door- the chaotic, grungy and irreverent “Delta House.”

The frat they joined was made up of rejects, nerds, IQ challenged, and the heaviest partiers in the history of fraternities.  All on academic probation, riding motorcycles up stairs, engaging in toga parties, wild food fights, and destroying the homecoming parade.  They wreak havoc on everyone in their way.

Sound familiar? The Delta variant is THE “Deltas” of viruses. If John Belushi were a virus, he would be the Delta Variant. But is it really that different than the plain vanilla Covid?

Where Covid was known for a cough and loss of taste and smell, the Delta presents more with headaches, sore throat, and fever. It appears equally likely to cause pneumonia and death however. So far, mortality rates have not been proven to be higher with Delta.

In summary, here is what you need to know about the Delta variant:

Herd immunity is close. But will that mean Covid is over? Remember the words of the most notorious Delta of all:

“What? Over?
Did you say over?
Nothing is over until we decide it is!
Was it over when the Germans bombed Pearl Harbor? Hell no!”